What an amazing day!! 1st official marathon completed and so many lessons were learned. 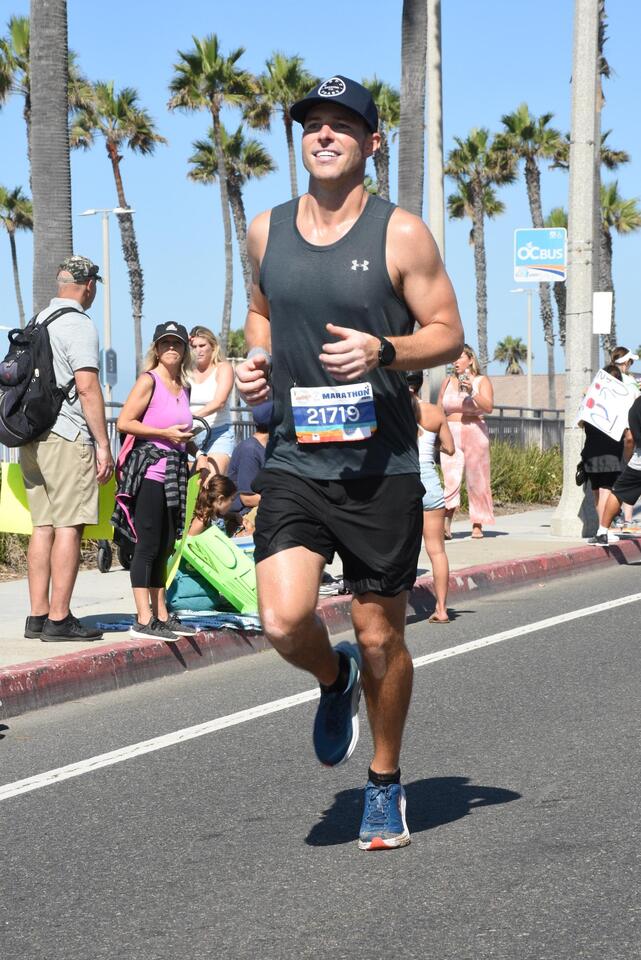 I arrived bright and early around 5:30 am for a 6:30 start. As It got closer to the time all the pacers and different time racers started to find their own. The fastest pacer I could see was a 3:05:00 which means if you stay with him he is going to lead you to ideally the best place to complete that particular time. If I could do it again I would have stayed with this group as the guy leading was great, at the beginning, I could hear him mentoring the other runners to stay relaxed, find another runner bigger than you you can draft behind to conserve 20% of energy.

Gun sounded and off we went, the first couple km’s were up the Pacific Coast Highway which had been blocked off by police officers at every intersection. I was feeling great and trying to stick to the game plan of not going out too strong with a 4:15 min/km pace which is still pretty fast in itself.

I found myself in a little bit of no man's land keeping up with the lead pack which was bordering the golden rule of don’t go out too fast with the second pack trailing staying at their pace behind us.

I had a decision to make do I keep with the front pack or drop back and coast with group two. I decided to stick with the lead pack. We would tow the 4:10 sometimes 4:05 then back to a 4:15 pace I stuck with this drafting behind two other male runners to follow instructions I’d heard previously.

We circled up a slight hill and around a park, still feeling great I continued to stride it out and stick with the crew. I planned to take my first of 4 gels every 45 minutes. So 45 minutes in I downed a gel and continued rolling.

This was a completely new experience compared to the previous couple of ultras I’ve done. I ran with a water vest as well as had stops scheduled to refuel. This was a sprint for 42.6 KM so there was no room to carry water or substantial fuel I carried the gels and salt tablets which have been a savior in previous races.

I planned to take a salt tablet every hour or when I felt my legs starting to cramp or give way. Usually within 60 seconds miraculously they give me a complete recharge as the cramping disappears.

I reached into my pocket to grab a salt tablet in complete horror when I found all six salt tablets had completely dissolved!! Oh S…! I muttered to myself.

Usually, I wrap them in plastic or a tic tac container, I’d completely forgotten that of course, they’re going to dissolve that's what they’re designed to do for quick absorption into the body. “ok, stay calm and relaxed, we will just switch to electrolytes at the water stations which should do the similar trick” I said to myself.

Not even close I would later find out!! But I’ll get to that. At this point, we were halfway in and I was astonished to notice I was on the pace I’d just run a 1:28:00 half marathon but my second half was supposed to be faster than the first.

when I hit the halfway point at this speed that voice on my shoulder started to appear, also known as the wall. Only this time the wall wasn’t something I could move through and past and at least get another wind, it was here to stay. 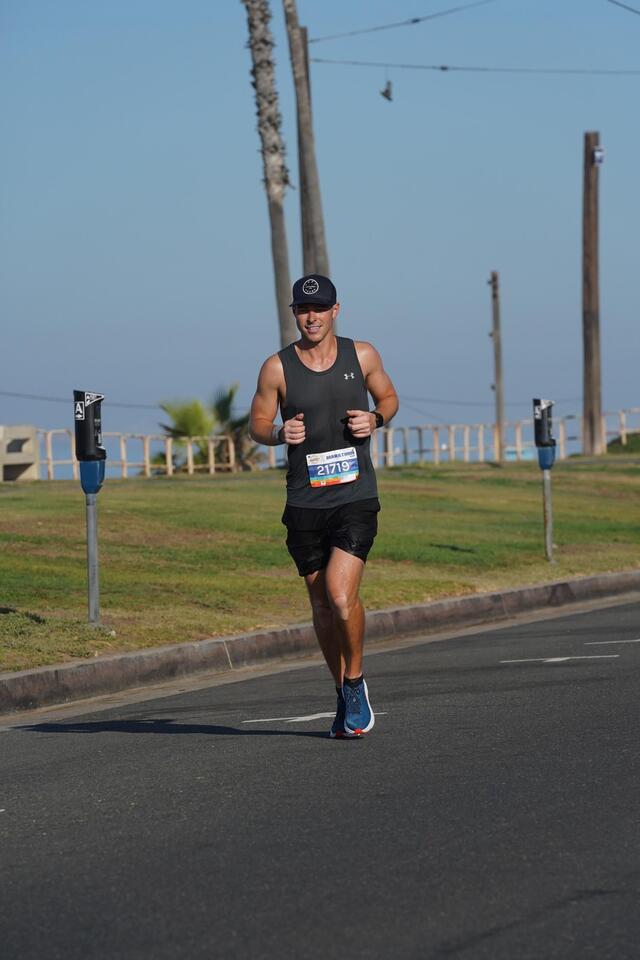 From 20k all the way to 32 km the voice continued to pester me with you can’t hold this, stop, slow down.

Around this time I passed the marathons first victim, a young girl who had passed me earlier and was making an incredible pace. She was layed out flat on the curb with three medics around her. She was in bad shape and her race was over. This was my first time seeing that and wouldn’t be the last as ambulance sirens continued to sound.

My self-talk this race was more than ever as this race honestly was more intense than any runs I’d done before at this speed and intensity. I would continue to repeat You go this Trent, yes you can Trent. What I’ve found is with self-talk and positive affirmations if you use your name it gives it a lot more presence and power. Almost like it’s coming from someone else.

I would also repeat to myself “just stay in the fight”…. As long as you keep going you’ve got a chance for your body to figure it out.

This is similar to everything we do in life… Those phases we’ve won or had success at I guarantee you hit road blocks and challenges but you were able to stay in the fight long enough to figure it out. This is the difference!!!

Another interesting discovery during this 12 km stretch of red lining was that looking at the entire race in a whole. I’ve got 22.6km to go was to much to comprehend and handle. When I broke it down into small bite size pieces I felt I gave myself a realistic target that felt within reach. What I mean is I would say ok when we get to this particular time say 30 minutes away I will take my next feeling gel which will give me the fuel and potential boost to keep my body going.

This worked really really well until I burned my last gel at 2:10:00 32km… I now had no carrot to dangle in front of myself and with another 10.6km to go it was looking pretty grim as my pace begin to slow and my engine started to fade. I was now running dry with no fuel and couldn’t see a hydration station in sight.

I started to plead for a miracle maybe Chasie or Alyssa will be up here with a banana or something to drink or anything that could possibly keep me in the fight. My prayers were unanswered and as my eyes started to close heavily I knew it was time to take my foot off the gas.

My dream of the sub 3 marathon was going to have to wait until another day.

I slowed down and eventually my legs couldn’t go anymore, I slowed to a walk hoping I’d be able to recover not he move and get back into a slow jog. In a daze, I began to wobbly leg stumble up the beach path on the water. It was a beautiful day around 30 degrees so the beach was packed with families and beach goers. I could see it in there eye they were concerned as they watched me pass in a daze.

The lactic acid started to build quickly in my legs. Each time I would try to run again my calves and feet would completely seize and stick it was brutal and super painful imagine the worst cramp you’ve had then imagine it unstoppable through both calves, ankles and feet.

I watched runner after runner slowly pass me, then saw the 3:05:00 pacer and his crew pass. This one hurt because I could literally se e my goal moving away from me into the distance as the guys continued to charge.

A lady had a stop with jelly beans and cut bananas I grabbed handful of both and in emergency downed everything I could to try and get the system back online. Nothing was working, I’d have to wait it out.

Eventually I could see time ticking away and I was closing on now losing the sub 4 hour marker. Absolutely not, I need to get running again, I said to myself. I tried to run seized up again, tried again and seized up another time. The next time I tried I was able to make ita little longer changing my running style within a couple minutes all of a sudden my body starts to loosen up and I was able to run the last 5 km’s at 5:15 min’s/km pace

With 100 meters to go closing in on the finish line I saw Chasie & Alyssa up against the home stretch gate line I was able to give Chasie a high five as i ran past and got the boost of emotion to sprint all the way through the finish line to finish at 3:54:00 for my first ever marathon.

Good friends Daron and Robyn also made the trip out to cheer me on at the finish line, which was amazing. As I crossed the line they yelled out and I was able to locate the team and decompress what had happened.

As I said amazing day and so many lessons learned!!

Thank you to everyone for the support leading into the big day and throughout the race.